Bankruptcy or Lawsuit Summons? You Should See an Attorney

You could theoretically deal with debt collectors, and other companies involved in the debt process, on your own. But, there are certain circumstances that you might need to get help from a professional attorney. Certain legal matters should be handled delicately, so getting advice from an attorney could keep you from making a big mistake.

If you’ve exhausted all your options and you’ve decided bankruptcy is the best option for you, it’s probably time to see a bankruptcy attorney. While you can file bankruptcy on your own, it’s likely easier to go through the process with someone who’s knowledgeable about bankruptcy law and experienced in the filing process. A bankruptcy attorney could look through your finances and help you decide which bankruptcy is right for you.

You could see a credit counseling agency before you visit the attorney if you’re not sure that bankruptcy is the final option. You should END_OF_DOCUMENT_TOKEN_TO_BE_REPLACED

There are two main types of bankruptcy for individual consumers. You may qualify for both of them or you may be limited to the type of bankruptcy that does not discharge your debt. Explore both options to decide which bankruptcy, if any, you could file.

Triggers For a Bankruptcy Dismissal

You failed to appear in court or follow a court order. You’re generally required to be at court hearings pertaining to your bankruptcy case. It’s important that you END_OF_DOCUMENT_TOKEN_TO_BE_REPLACED

Let the Number of Debts Influence Your Decision

When you’re trying to decide whether you should go through with debt settlement or file bankruptcy, one big factor should play into your decision. That is the number of debts you have.

People have different debt situations and different tolerance for side-effects in dealing with debt. People considering debt settlement often also consider bankruptcy and vise versa and often choose one over the other because of the result they’re seeking.

If you only have just one or two bad debts you need help with, debt settlement might be a better solution and here’s why. Bankruptcy has long-lasting consequences. It stays on your credit report up to ten years. It’s on public record forever. Creditors, lenders, and employers may ask if you’ve ever filed bankruptcy and you could be guilty of fraud if you say you haven’t filed bankruptcy when you actually have. You don’t face the END_OF_DOCUMENT_TOKEN_TO_BE_REPLACED

Get Rid of Tax Debt in Bankruptcy

Tax debts can be some of the hardest debts to get rid of. Bankruptcy may be an option for certain types of tax debts. Don’t get your hopes up, getting rid of tax debt, even in bankruptcy, is usually very difficult.

Which Taxes Can Be Discharged

The IRS has strict limits on which taxes can be eliminated in bankruptcy. First, tax debt is typically only discharged in Chapter 7 bankruptcy. If you file Chapter 13 bankruptcy, you’ll likely end up paying some or all your tax debt. Second, you can only typically discharge income taxes. If you owe any other type of tax, like payroll tax or self-employment tax, you cannot discharge it in almost all cases. Third, you must not have committed fraud on the tax you owe. For example, if you filed a tax return using the wrong Social Security number on purpose, you almost always can’t discharge the tax you owe.  Finally, the taxes to be eliminated in bankruptcy generally must have been “due and owing” for more than three years before you file for bankruptcy.

The IRS generally must have internally acknowledged or assessed your tax debt 240 days prior to the day you file bankruptcy.

If you’re overwhelmed with credit card debt, you may consider filing bankruptcy to either get rid of your debt or to restructure your payments so that your debt is easier to repay. Here are some details about bankruptcy to help you decide if it’s the right choice for you.

There are two types of bankruptcy for consumer credit card debt – Chapter 7 and Chapter 13. Chapter 7 bankruptcy typically allows you to get a discharge of allowable debts – most credit card debt can be discharged, but there are a few exceptions, like debts that were incurred through fraud. To qualify for Chapter 7 bankruptcy, you must pass a means test that shows your current monthly income (as defined in chapter 7 of title 11 of the United States Code) is lower than the median income in your state. Chapter 7 bankruptcy may require you to give up some assets – if you have any. Those assets would be sold and the money used to pay back your debt. There are state and federal laws governing what assets you can keep and which you have to give up.

There are some negative side effects of bankruptcy that must be considered before you file bankruptcy. Bankruptcy will END_OF_DOCUMENT_TOKEN_TO_BE_REPLACED

Many people fall into this type of situation – they experience financial setbacks that prevent them from keeping up with monthly debt payments, but they have enough money in a retirement account to pay a portion of the debts. Strongly consider the consequences of using your retirement money to settle your debt.

Consequences of Withdrawing from Retirement

Many retirement accounts charge a penalty if you withdraw money before you reach age 59 ½. The amount you withdraw typically must be included in your taxable income if the contribution was made pre-tax. That could increase your tax liability and may cause you to end up with a tax bill when you file next year’s tax return. You may also face an additional 10% tax penalty.

There are some exceptions to paying the early withdrawal penalty. For example, the penalty doesn’t apply if the distributions are equal to or less than your deductible medical expenses. Unfortunately, most of the exceptions don’t apply if you’re using the money to pay off your credit card debt.

When you’re thinking about settling your debts, you’ll probably also wonder what your other options are. After you evaluate the alternatives to debt settlement, you could decide if debt settlement is truly the best solution for your debt.

A goal of Chapter 7 bankruptcy is to get most, or all, of your unsecured debts discharged. Good candidates for Chapter 7 bankruptcy have low income (less than the median in their state) and few or no assets. If your current monthly income (as defined in chapter 7 of title 11 of the United States Code) is higher than the median income in your state, then you won’t qualify for Chapter 7 bankruptcy. And if you have valuable assets, they’ll probably be seized and sold by the bankruptcy court and the proceeds will be used to pay back your creditors. But, if neither of these cases apply to you, then you could get your unsecured debts discharged in bankruptcy and might only pay the costs of filing bankruptcy and hiring an attorney. 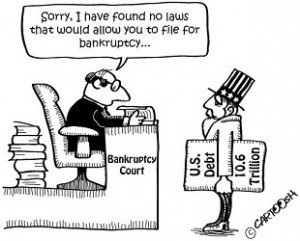 When people are considering debt settlement, they often think about alternatives such as bankruptcy. In order to understand how bankruptcies work, we have created a list of 19 blogs which share their knowledge and advice about filing for bankruptcy. Each provides ample amounts of information which is why we’ve named them the 19 must-read blogs about bankruptcies. END_OF_DOCUMENT_TOKEN_TO_BE_REPLACED

Debt settlement is often presented as an alternative to bankruptcy, so it’s important to understand how each one of these works. When you’re presented with these two options for dealing with your debt, your future may depend on making the right choice.

To settle your debts, you must typically let your accounts become past due so the creditors have a reason to settle the accounts. Sometimes the accounts must even go on to a third-party debt collector before you can negotiate a settlement. This means your accounts have become seriously delinquent and your credit has probably been affected.

Before you can settle an account, you probably have to save up money to make a settlement payment. You’ll typically need between END_OF_DOCUMENT_TOKEN_TO_BE_REPLACED