Effects of Inflation on Debt and Buying Power

By LaToya Irby in Debt Relief

Inflation is defined as a general increase in prices and fall in the purchasing value of money. With inflation, you’re generally able to buy less and less with the same amount of money. You’ve probably seen inflation happen over your lifetime. If you’re in your 30s or 40s, you were probably able to buy a candy bar and a soda for just $1 when you were a kid. Now, you could probably barely buy a candy bar for a $1, much less a soda. Because of inflation, you’re generally now able to buy less for $1 than you were several years ago.

Inflation and Paying Off Debt

In terms of repaying debt, inflation is typically considered to favor the debtor since you’re paying the creditor back with devalued dollars. In other words, you borrowed $100 last year and got the benefit of that $100. This year, the same goods would have cost $110 and you’re only paying your creditor the original $100 you borrowed. Thus, the creditor would theoretically take a loss because they’re probably able to do less with the $100 you repaid than they could have done with the $100 you borrowed.
That’s a simple example, but inflation’s effect on your debt is typically more complex. Whether it gets easier or harder to repay your debt after inflation probably depends on a few other factors: any subsequent increase in your living expenses, whether you have fixed or variable interest rates and whether your income increases, decreases or remains stagnant.

If your income does not increase with inflation, it could become more difficult to repay your debt if the cost of everything else increases and you have less money leftover to pay your debts. The situation worsens if your debts have variable or adjustable interest rates and your adjustable interest rates rise and then your monthly debt payments will likely rise too. Again, if your income does not keep up with inflation, you’ll probably have a hard time making ends meet.

Let’s say your monthly income is $3,500 and you spend $1,200 of that amount on monthly fixed-rate debt. Assume your other monthly living expenses are $1,600. That would leave you with $700 of extra money left over each month.

Assume there’s a 7% inflation. Your fixed-rate debt payments remain the same and your monthly income remains the same. However, your same monthly living expenses increase by 7% to $1,712 leaving you with just $588 left. Whatever you were doing with your extra money last year, you’ll be doing less of it this year because you have less money because prices have increased with inflation.

The following graph shows how your living expenses could increase and your buying power could decrease with inflation (average inflation rate of 3.4%, given your income remains the same). 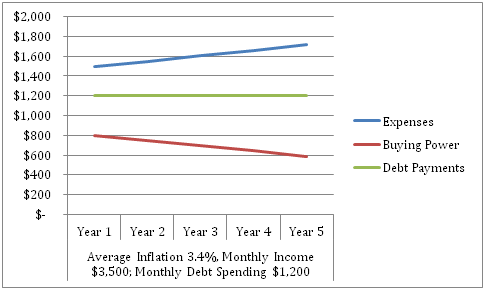 What if there was inflation and your debt had variable interest rates? That’s common with credit cards and adjustable rate mortgages.  Let’s assume that along with the 7% inflation, your interest rates also increased causing your debt payments to rise by 4%. Not only would you be spending $1,712 on the same monthly expenses, you’d be spending $1,248 on monthly debt payments. You’d be left with $540 after all your monthly living expenses and debt payments are covered.

The next chart shows how your living expenses and debt payments could increase with inflation when your rates are variable. Assuming your monthly income remains the same, your buying power could drop even more. If you were using your extra money to help pay off your debt, inflation would likely slow down your progress. 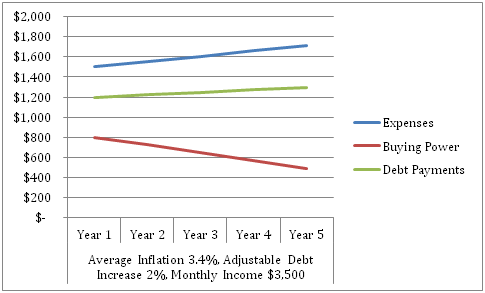 Let’s say you receive a 5% raise bringing your monthly income to $3,675. With 7% inflation and a 4% increase in debt payments, you’d have $715 per month leftover. Of course, your purchasing power is still possibly slightly lower than it was the previous year considering the increased prices that result from inflation. If all your debts had fixed-rates in this scenario, then your income after the same monthly expenses and debt payments would be $763.

The following chart shows the possible movement of your living expenses and buying power with inflation and an average 3% wage increase. Notice how your buying power, e.g. the money leftover after your bills are paid, could rise instead of fall. Under this scenario, you’d probably have an easier time using your extra money to pay back your debts because your wage increase probably improves your buying power. 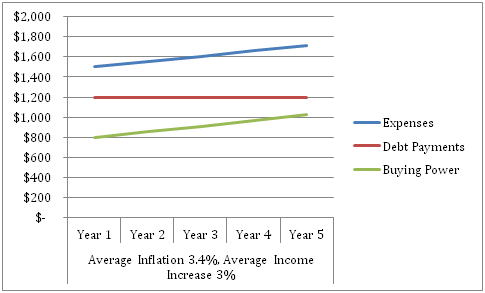 This final chart indicates what could happen with inflation, variable interest rates and a wage increase. 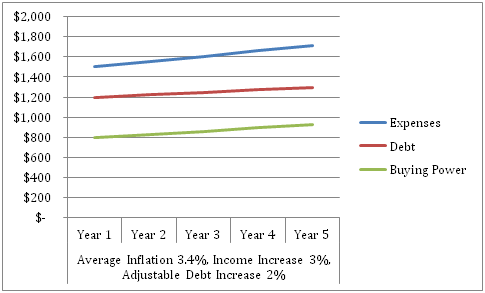 Inflation without a corresponding wage increase likely hurts you in terms of your purchasing power and your ability to repay your debt faster. Inflation is likely to happen. You should watch the relationship between your living expenses and your income to be sure that your buying power isn’t disappearing.

For a detailed look into inflation in America, from the 1950s until now, check out the Grandfather economic report.

LaToya Irby is an expert blogger in personal finance. She is passionate about helping others understand the value of good credit and debt management. LaToya has experience working as a collection specialist in the financial services industry.